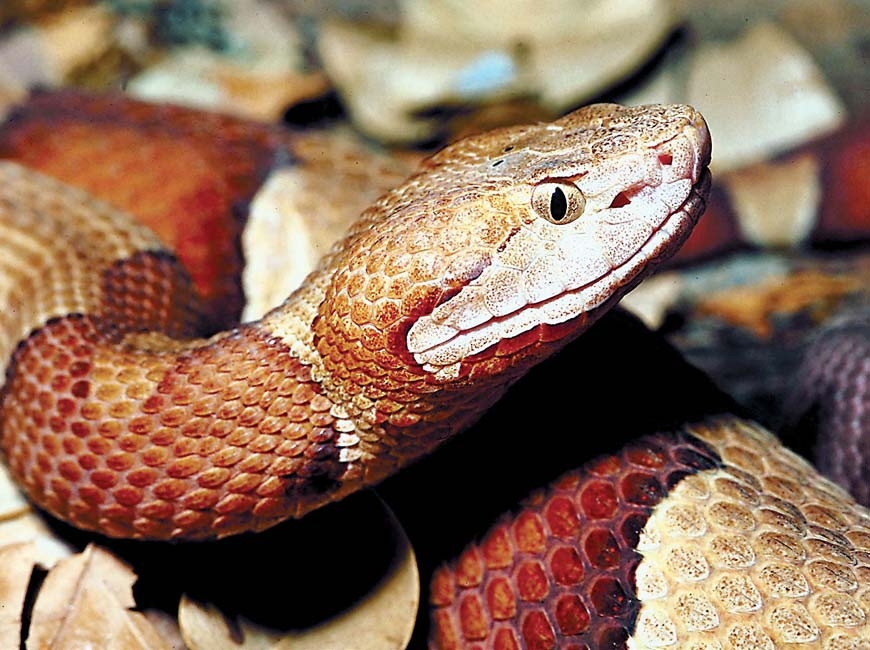 Snakes are among the world’s most beautiful, fascinating, and ominous creatures. We are at once attracted to and repelled by them.

The ancient Cherokees focused several of their myths about the close relationship of good and evil upon the Uktena (“the keen-eyed”). This was a monster serpent 30-feet long that was as large around as a tree trunk, with horns on its head and a diamond-like crest in its forehead. The light that blazed from this crest attracted humans to sure death like moths to a flame. On the other hand, by slaying the monster and extracting the crest, a courageous member of the tribe could obtain visionary powers.

Here in the Blue Ridge country, Uktenas are no longer reported in the deep passes like the Nantahala Gorge where they once lurked. We do have, however, the serpent that inspired the Uktena myth — the timber rattlesnake. And we do have northern copperheads, the only other poisonous snake found in the southern mountains.

Cottonmouth moccasins are always being erroneously reported here, but that species is, in fact, found no farther inland than about the fall line, which demarcates the eastern piedmont from the western edge of the coastal plain.

As poisonous snakes go, the rattler and the copperhead are quite sufficient in regard to both their wondrous beauty and their ability to inflict pain or death. Nothing else quite focuses your attention and sets all your nerves on end as suddenly encountering one of these critters in a blackberry patch or high up on a cliff side.

My now-grown children remember and still laugh about the time their father set the world record for the standing broad jump. We were camping in the remote Rainbow Springs marsh in the Nantahala Mountains. To make a campfire so as to prepare breakfast, I pulled a limb out of some underbrush that had a 48-inch timber rattler on the other end. Who says humans can’t fly?

This seems to be a scarlet tanager kind of year. I’ve been seeing and hearing them at my…

To this day, I vividly recall the serpent's powerful, near-black body, which showed just the slightest bit of yellow, and the gleaming, totally fearless eyes. Coiled with its tail buzzing a scintillating warning, it was in every sense the wildest and most beautiful creature I’ve ever encountered. And it was also the most ominous and potentially dangerous.

The copperhead is the most common by far of our poisonous snakes, being found in a variety of habitats from the lowest elevations up to perhaps 3,000 feet. They often hide in rock walls or beneath boards and pieces of tin around rural dwellings. Most sawmills have resident copperheads because they are fond of sawdust piles. Bryson City resident Charles Willis, who used to catch copperheads and rattlers with his hands as a hobby, sometimes finds them in parking lots here in town.

“Well, they’re everywhere," he observed when asked about where to look for copperheads. “I’ve pointed out copperheads in the woods to people who couldn’t see them at all until I picked the snake up and showed it to them. It’s a puzzle folks don’t get bit more often, especially in places like the Nantahala Gorge, where those rafters get out and ramble around in the brush in shorts and sneakers. I guess they just step right over them without seeing them and keep on trucking.”

William Hardy, long-time director of the “Unto These Hills” outdoor drama in Cherokee, told me about an evening when a nest of copperheads was discovered at one end of the outdoor stage. The remainder of the production was performed at the other end.

Reports of copperheads coming into homes are not unusual. Asheville Citizen-Times columnist Bob Terrell was told by Michael Medlin about the time his sister was being married at his home on Wolf Creek in Graham County and a copperhead showed up.

“Happened in my living room,” Medlin reported. “Right in the middle of the shebang, out from under the couch crawled this big copperhead. The room cleared like somebody had thrown a live grenade in the window.”