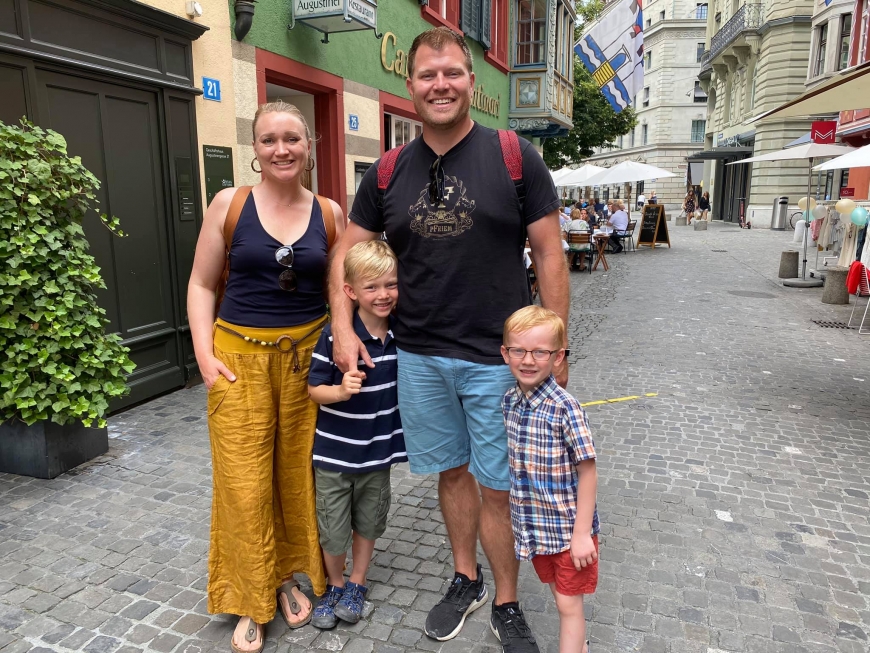 Living abroad with my family is simultaneously good, weird, and freeing. As I sit down to pen these thoughts, I‘ve just kissed my eldest goodbye and sent him off to school. On a bus? Nope. He's walking, and he's only 6. Culturally, this behavior is expected in Germany.

Does it make me nervous? Sure, it does. But who am I to question what is socially acceptable in someone else's culture? Walking to school is almost non-existent in the U.S., but here, 90% of kids walk or bike to school by themselves. The remaining students? They take the city bus. Trust me, I can feel your eyes widening all the way to Europe as you read this. I've had to swallow my fear, pride, and doubt many times over the past few years.

Questioning normalcy is the most encompassing struggle as an expat. Simply because you have dinner at 5:30 p.m. and kids in bed by 7 p.m. doesn't mean it's commonplace in other parts of the world. Some cultures have dinner toward 10 p.m., and others have a large meal for lunch and only bread for dinner. Is it wrong? No. It might look different than what we were groomed to accept, but it doesn't make it wrong.

We left the U.S. 5 ½ years ago, and my head still spins on the daily. Things people eat, how parents raise their children, the way a family unit works and interacts, how schools are structured, workplace environments, and healthcare systems are only a few facets where you will find yourself asking, "What is normal?" Your level of acceptance and empathy of the human race will grow deeper and stronger with every sunrise. While I miss certain things from the good 'ol US of A, I'm extremely thankful for the opportunity to live in another country.

Every area of our lives has been night and day different from one continent to the next. It's fascinating and tough at the same time. Condo life in Singapore was in a high-rise, having everything around the corner at our fingertips, and surviving on public transport with no car in a massive metropolitan city. Village life in Germany is a complete 180. We have a house, yard, one car, and an overall slower pace of life. Some things may take days to get because stores close at 6 p.m. through the week and everything is closed on Sunday. Everything, even grocery stores. I always assumed living in four different American states would prepare me for drastic change, but I had a swift smack of reality when moving abroad. Things may be slightly altered from state to state, but they are largely the same compared to an international move.

My husband and I originally said yes to a short-term contract overseas due to our passion for international travel. We both traveled extensively and often wondered what it would be like to plant roots across the globe. With a 16-month old and little brother close to making his appearance, we hauled 32 hours in the air to begin the adventure of a lifetime. Has it been easy? Absolutely not. I've had moments of sheer exhaustion, panic, and anger. I’ve found myself on the kitchen floor questioning my life's purpose in another country. However, the friendships and life lessons far outweigh the struggles, even if I am still converting ounces to milliliters and translating products on a daily basis.

Living abroad will challenge a person in ways never thought possible. Were you served fish soup or told not to shower for a month after giving birth? Come to find out, this is the norm in most Asian cultures. I was completely unaware of these practices until bringing my youngest Earth-side, especially after going through the experience in the States. But, I did not question something a culture has followed for hundreds, maybe thousands of years. Mind. Blown.

The best parts involve our kids. Having lived in Asia and now Europe, our young sons have had opportunities to taste the air and feel the Earth of nearly 30 countries. They are four and six-years old. I didn't leave the United States until the end of high school, and even that was a monumental challenge. Living abroad makes country hopping easily accessible and more affordable. Budget airlines took us all around Asia and Australia for as cheap as $10-$20. And being centrally located in Germany, we can drive three to four hours and be in Italy, Austria, the Netherlands, Poland, Belgium, France, and Switzerland.

At first we didn't think about how this would affect the kids. They were so small and wouldn't have many memories from our two-year, whirlwind Asian adventure. Boy, were we wrong. Those two years flew by in the blink of an eye, and we soon realized we weren't finished adventuring. We live in a mighty big and awesome world, of which we had only scratched the surface. We craved more, and we quickly saw the benefits of raising children in other countries. The exposure to literally everything at such a young age is golden.

It's commonplace for them to be surrounded by little friends who all speak different languages at home, yet Deutsch rolls off the tongue when they play with one another. Having friends from all corners of the world affords them the opportunity to see a vast array of foods, religions different than ours, sports, clothes, and even cartoon shows. As a mom, it warms my heart to hear them ask empathetic questions that would have never crossed my mind until after college. It's also a fun challenge having bilingual kids who can translate for you in public arenas. Yes! My children are smarter than me, and I have zero shame about it.

Initially, my husband and I selfishly wanted this lifestyle to see the world and seized the opportunity. Everyone (and I mean everyone) thought we had lost our ever-loving minds doing this with a small tot and another on the way. But to us, we didn't know if such a time would come around again. And you only live once, right? This idea went completely against the grain of what we had been taught. Aren't you supposed to make good grades, go to college, get a real job, and settle down for marriage, home buying, and babies? Oh yeah, and a fluffy dog of some sort. Thing is, we HAD accomplished those things and yearned for more. Not more riches or wealth, but experiences and adventure. And gosh, adventure we certainly got! We even landed on my favorite show, House Hunters International.

I often get asked if we would ever move back to the U.S., and honestly, it depends on the day. While I miss all of our family and dear friends, (and let’s not lie...Mexican food!) it becomes harder and harder to turn our backs on the quality of life abroad.

Would I recommend an international move? Absolutely! You might accidentally order turkey instead of chicken from the butcher and not realize it until you return home. But, hey, life lessons! I think everyone should experience it once during a lifetime. Whether it's a semester abroad in college, a corporate contract in the adult world, or retiring in a different hemisphere, say YES! While seeing the sites on vacation is nice, experiencing everyday life through another culture creates a more humbled, well-rounded person. And today’s world could definitely use more of that.