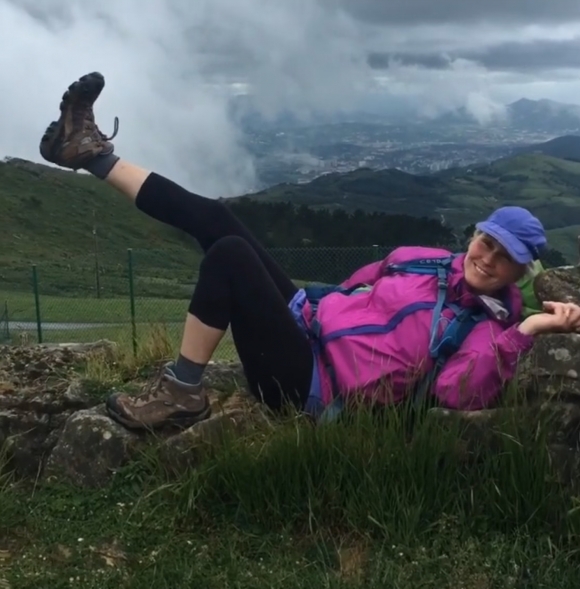 The sun was shining dry, white hot heat the day my mother and I found ourselves out of money, tired and hungry in a town we’d never stepped foot in before in Northern Spain — for the second time in less than a month.

Our guidebook, The Northern Caminos, was creased, highlighted, tattered, torn, soaked and sun-dried several times over by this point. I remember gripping that small lifeline with sweaty hands and swollen fingers. I remember feeling the heat in my cheeks and seeing the flush in my mother’s. And I remember feeling so frustrated. Not with the fact that we had run out of money and didn’t know how or where we would sleep or eat that night — we had hammocks and I knew we would be fine without food for a day — but with the fact that my mother might as well have been sitting on the beach with her favorite book, fully rested and fed, looking beautiful. How could she act like everything was fine … everything was not OK.

Fast forward a few hours and we were sitting on a terrace, showered and out of our hiking boots, relishing a cold beer. She had pulled me from my red-faced, sore feet, angry, tired, toddler-like mood. A stranger had lent us money that we would pay back to another stranger at the next town down the road. Assuming we could get the credit card to work. Assuming we made it to the next town. Assuming we could track down that human we didn’t know, in a town we had yet to lay eyes on.

If my memory tracks, we were drinking beer with the leftover euros from the money we’d borrowed to pay for the room, and I think someone had given us leftover food for dinner. Or perhaps we had paid for the food and were going to pay back that money as well? Regardless, everything was fine.

I don’t remember if that was the first or second time we had run out of money. On the other occasion we did go to bed without dinner, and we didn’t pay for the albergue we stayed in. I didn’t sleep that night. In the dorm where we landed there were three old Italian men snoring furiously and talking in their sleep at the same pace they yelled to one another on the trail. When my mother ventured out of the dorm because she couldn’t sleep, she happened upon another Italian man with whom she smoked a joint and shared a beer. We never figured out if he was a psychiatrist or simply in desperate need of one, but it was good stuff and she slept like a baby the rest of the night. Everything was fine.

The fact that it was after midnight, two members of our party had been traveling for most… She was 70, or so she said, but looked 15 years younger. She was alone and sipping wine…

This must be the place: I’ve been running so long on the same old ground, gonna rattle these chains till the morning light

That’s how our entire trip went from beginning to end.

The Madrid train station is a mammoth. It encompasses multiple buildings, with multiple floors, spread out among multiple city blocks. When I went to meet my mother there on the day she was supposed to arrive, I couldn’t get in touch with her. Messages weren’t going through and I had no idea what part of the station she could be in. Multiple trains and busses, coming and going from multiple airports, didn’t make the search easier. Shortly after I arrived, we just ran into each other. She hadn’t figured out how to connect to the wifi.

On the train from Madrid to Irun, where we would start the Camino, we bought snacks in the food car only to learn the credit card machine was down and we were out of cash. No matter, the attendant let us have them for free. That same evening, we arrived in the small town after 10 p.m. and decided to eat dinner before finding a room. It was after midnight by the time my mother found the only room left in the entire town. The next morning we found out, after ordering coffee, that we could only pay for the room and the coffee with cash. I didn’t even have time to stress out before my mother convinced the barmaid that we would of course come back and pay, we would just have to leave first to find an ATM.

On the journey home, we had trouble with the trains (again) and arrived at the Madrid airport to fly home mere minutes before our separate international flights were scheduled to leave. We hugged goodbye at the check-in lines, laughing as we said “Good luck! I hope I see you in Charlotte tonight!” Hers was a joyful laugh, lit up by adventure. Mine a stressed out, might-be-about-to-cry laugh. Before I was out of earshot I heard her yell “Remember! Quien tiene boca, a Roma llega!”

Her famous line. Literally, “he who has a mouth makes it to Rome.”

In desperation I took it to heart. I got to my check-in line and told the first airport worker I saw that I was going to miss my flight. “Joder…” she rolled her eyes at me and I knew it was a lost cause. She grabbed my arm tight enough to leave a bruise, like a child who had misbehaved, unhooked the rope and dragged me out of the crowded line, all the way up to the counter.

People were angry. They were throwing up their hands, yelling.

She checked me in, handed me a bright orange, laminated sheet of paper and told me to run.

Turns out that sheet of paper was a magic ticket through security. And, of course, it turns out that my mother made her flight too. Everything was fine.

But, there is more.

From the eyes of her child, there is a certain amount of magic to the way everything seems to work out for my mother. Dire situations, uncomfortable situations, difficult situations that would make others turn away from the adventure or task at hand always work out for her. Everything is fine. Relax. “Quien tiene boca llega a Roma.” Those phrases I’ve heard a million times.

I believe there is some reciprocation, some kamra going on. Loretta, my mother, has shouldered more than her share of grief and pain in this life. Yet she constantly puts good, bright, healthy energy out into the world. Maybe the world just consistently points it right back at her. Or maybe there is something more. Maybe, she has more agency in these moments than I am keen to realize. Maybe it is her attitude. Maybe it is her constant intention to make “everything fine” that dissolves those dire situations as quickly as they crop up.

After a month of walking, Loretta and I made it to Santiago, the end of the Camino de Santiago. That last day we walked 28 miles. I didn’t know it at the time, but Loretta had walked across the entirety of Northern Spain with a quickly deteriorating hip, a relic of the pain and trauma of her past. And she was the one that held me when I unexpectedly broke into ugly, heaving sobs at the sight of the Catedral de Santiago.

That is a mother’s love.

Loretta has taught me that the magic in life is what we make it. It is the adventures we choose, risky or uncomfortable as they may be. It is the decision, made over and over again to relax, because everything will be OK. It is cafe con leche after the first few hours of quiet morning hiking. It is a cold beer, bought on a borrowed euro. It is the promise that everything is fine.