Stamey made the announcement at the county commissioners meeting on Monday and choked up as he thanked the commissioners and other county employees.

“It has been an honor,” Stamey said. “It’s time for me to pursue other opportunities.”

Stamey can’t say exactly what his next career move may be but hopes to return to the health care field in some form.

The commissioners said they have known Stamey’s plans to step down for weeks.

“We have tried to convince you to change your mind, to no avail,” said Commissioner Chairman Mark Swanger. “We obviously wish you the best in your future endeavors and thank you for all you’ve done.”

The commissioners appointed Ira Dove, the director of the Haywood Department of Social Services, as the interim county manager.

There has been a surge of retirements and resignations among county and city managers around the state. About 13 county manager positions are vacant right now, including Wake, Orange, Durham and Mecklenburg counties.

One reason is coincidence — many are simply hitting their retirement age, like Stamey, who now has enough years of public employment to qualify for state retirement.

But the job isn’t exactly a walk in the park in today’s politically charged and financially trying environment. Regionally, Macon County is also looking for a new county manager and the towns of Canton and Maggie Valley are without town managers.

Stamey was heaped with accolades by commissioners Monday for his steady hand shepherding Haywood County through the recession.

“There were some trying times, some difficult times,” said Commissioner Kirk Kirkpatrick. “Marty did a fabulous job.”

He was able to run the county under stringent budgets, the commissioners said.

“He ran the county like a business in a way,” said Commissioner Kevin Ensley, adding that Stamey’s time in the private sector was an asset.

Stamey is known for his warm persona and approachable demeanor, largely keeping the county out of major controversy, upheaval or blow-ups during his time at the top. Yet he still ran a tight ship.

Stamey didn’t play politics with his position but instead strove to work with everyone, seek compromises and objectively keep the commissioners apprised of important goings-on.

“I’ve worked with him better than any county manager,” Ensley said.

Dove said he was not expecting to be tapped as interim manager but welcomes the role.

His mind had been elsewhere in recent weeks as DSS dealt with the government shutdown threatening various social welfare benefits, he said.

“I view the county manager’s position as another step in helping Haywood County residents have the best quality of life possible,” Dove said. “I thank you very much for the honor.”

Dove praised the quality and congeniality of employees and elected officials at the county level.

“In any of these positions, it is the people you are surrounded with that make the difference,” he said.

Dove will work with Stamey during the next two-and-a-half months to learn more about the county manager role and make a seamless transition at the end of the year.

“I am confident we are in a positive position with the leadership we have in place that we can maintain continuity of our operations and the continued success of the county,” Stamey said.

Dove could ultimately be a candidate for permanent county manager. Swanger said Dove “has just the right skills to help us continue to provide effective local government.”

As DSS director, Dove oversaw 140 employees and a budget that accounted for about quarter of the county’s overall finances. Before becoming DSS director, Dove had served as the attorney for DSS since 2001 and was an honors graduate of the UNC-Chapel Hill School of Law.

While Dove is serving as interim county manager, a couple of employees at social services will take over some of the director duties, but an official interim director of DSS is not being named for now.

Until Stamey’s recent stint with county government, he had worked in the medical or emergency services field since the age of 15, when he got his first job as an orderly with the Haywood County Hospital.

“I have this intrinsic drive and passion in me to go back more on the health care or emergency services side. That is where my passion is, and people around me know that,” Stamey said in an interview Tuesday.

Stamey said he and his wife are exploring options here in the region, but also beyond — despite Stamey calling the mountains home his entire life.

Stamey is a local boy through and through. He grew up in Clyde, went to middle and high school in Canton and then college at Western Carolina University, where he majored in emergency medical care. He later got masters degrees in business administration and health administration.

He served as the Emergency Medical Services director for Haywood County in the 1990s, then worked at Haywood Community College in emergency services education and later managed regional transportation services for Mission Hospital in Asheville.

“Marty has been a strong, caring leader during some of the most difficult budget years we’ve ever had to face,” Swanger said. 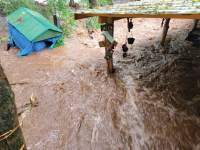 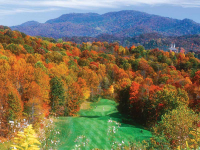 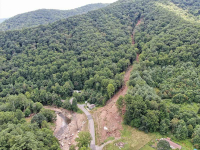 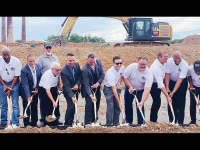